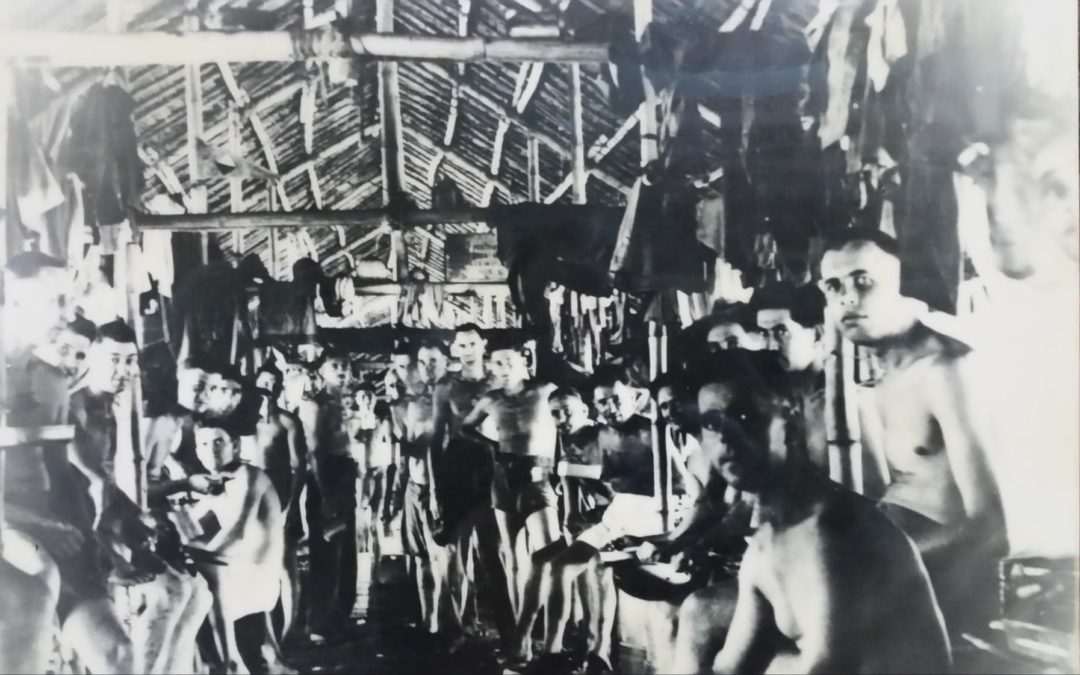 I have always struggled with how to mark occasions like VE Day. Getting the balance right between celebrating victory whilst remembering the millions of lives lost is tricky. However, one thing I am sure about is that their most important role is to remind us to try to make sure that such awful conflicts don’t happen again.

For me, this year feels different. Not because it’s the 75th anniversary but because we’re in coronavirus lockdown. We’ve had more time to consider what it all really means away from the constant drain of work and treadmill of modern life. Personally, I’ve had more time to talk to my kids and explain what little I know of war, why it happens and what it does to people. And in doing so, I realised that – like many families – we have our own tales that should be documented somewhere before it’s too late.

On my father’s side, our family has very few wartime stories. I don’t know why, but suspect it’s because the Wheatleys are the least nuclear family I know. My sister and I were sent to boarding school in the UK, thousand of miles away, by two parents in an increasingly dysfunctional relationship with no sense of family or togetherness. We never got together to talk about anything. My wife’s family has wartime tales of Africa and Asia but it’s my mother’s family – the Cardozas of Singapore – that this post is about.

My mother was born Albertha Henriette Cardoza in 1931. In ten days time she will be 89 years old. She has advanced dementia. She lives – at her own insistence – alone in her bungalow in Surrey but in the safe hands of her carers who visit her every day. To look at her now, you would never know of the stories she has to tell. Even when my sister and I were kids, she would rarely say anything unless she’d had a few glasses of wine when a few stories would pop out and we’d listen intently. We could tell from her tone that these meant more to her than she would admit.

She was almost 11 years old when the Japanese invaded Singapore in 1942. She was the 9th of 10 children of a proud and staunchly Catholic Eurasian family struggling to make ends meet. Today, she is the only one left. Her dementia plays evil tricks on her whenever she asks to call her siblings back home in Singapore to catch up only to discover, again, that they have all passed away.

There are two stories that I remember most. The first is about her and her 4 sisters and the second about her brother-in-law, our Uncle Denis, who was married to her sister Lulu. A word of warning – none of these stories are kind to the Japanese. I mean no malice in writing them down, but they are historical events that should not be forgotten. As a boy, my mother often used to advise me on my future choice of wife. It was mostly jocular ribbing, extolling the merits of finding myself a nice Asian girl like herself who would love me, feed me and make me fat. However, she would always append it with a curt “….but if you marry a Japanese girl, I will never forgive you.” I hope the following will help illustrate why she felt that way.

The first story. Early evening, Singapore, 1942. Pre-modernisation, pre-airconditioning, pre-anything like the Asian supercity that exists today. A large family sitting down to dinner at the end of a hot, humid day. The chatter of 10 girls and boys, the admonishing parents. Then, a noise with an all too familiar rhythm that’s getting louder. It’s the sound of the marching boots of a troop of Japanese soldiers making their way down the street, stopping to knock on each door. The mood around the table changes.

Their father anxiously prepares to answer the door but before doing so he and their mother anxiously separate the boys from the girls, hiding the latter (youngest 11, oldest in her early twenties) around the house. Why? Because the Japanese soldiers are looking for young local girls to rape. To my knowledge, none of the Cardoza girls ever suffered at their hands but I can’t imagine the fear that they and their parents must have felt whenever they heard those marching boots and knocks on the door. I’m told that on one occasion, when the girls had the misfortune to come across some soldiers outside the house, the only reason why they weren’t attacked was because one of the older sisters could speak just enough Japanese to get them out of a very tricky situation.

The second story is about my Uncle Denis. When I was a young boy, I used to be scared of him. Not because of anything he ever said or did, but the opposite. He was always kind, but he never said much to me and even when he did I struggled to understand his accent. One thing I did know though, was that he was tough and brave. I recall once, when we were visiting my cousins in Australia when I was around 5 years old, I went into the garden, picked up an interesting looking spider and brought it back in for the adults to see. It was a venomous redback, a black widow. Whilst every other adult panicked, he calmly walked over, took it off me, killed it and then ruffled my hair with a little laugh.

Many years later I was back in Australia, this time on my own traveling before starting university. Older, and bolder – although still a bit scared of this tough but kind old man – I managed to have a few chats with him. He had been a prisoner of war on the Burma Railway, the notorious Death Railway, on which the Japanese forced up to 250,000 Allied POWs to labour in hellish conditions causing the deaths of more than 100,000 of them. They were beaten, starved and treated like vermin. Apparently, the test of whether a man was fit enough for a day of back-breaking work was if he could stand up for more than a minute without collapsing in the morning.

My Uncle told me about two incidents. The first was quite generic, about how, in the face of the absolute neglect from their Japanese captors they had resorted to doing their own medical and dentistry procedures. He said that if anybody needed a tooth extraction, they’d sink half a bottle of whisky before letting one of their friends pull it out with a pair of pliers. Ow.

The next incident is one of heroism and ingenuity. Food was scarce in the camp. The meagre and disgusting fare served up by the Japanese was supplemented by whatever the prisoners could find in the jungle and sneak back into the camp, but with guards watching their every move and the very real risk of execution on the spot, it was pretty challenging. One day, Denis was put in charge of a small herd of cows. These were of course for the benefit of the Japanese, not the prisoners. Every morning, he would take the cows to a field where they would graze for the day and then bring them back in the evening. Every time he took them out and brought them back, the Japanese would count them, making sure that the same number that went out came back in, just in case any of the prisoners were tempted to take one to eat. The punishment for that being, of course, almost certain death.

One day, Denis noticed a bull in the adjoining field. You can probably guess what happened. Between him and his fellow POWs, they would take it in turns to let the bull into their cows’ field to do what bulls do. Months later, the prisoners would take the now pregnant cows to the fields as normal. The Japanese, concerned as they were with just the number of cows, continued to count them in and out. In the meantime, the POWs would watch each cow like a hawk to identify which ones were about to give birth. When the moment was imminent, they would gently cajole the cow to a quiet spot. As soon as a calf was born they would whip it away, kill it, butcher it and somehow sneak it back into the camp to share with their fellow prisoners. It was often the only fresh meat that many of the men had and would have helped to keep some of them alive. And all the time, the Japanese never noticed.

My uncle is no longer with us but I often think of this story, of him and an entire generation who suffered more than we will ever know. We should be so proud of them. It feels even more poignant now, as people complain about our current situation which is so trivial by comparison. I look at my Mum, so frail today but whose future life as an expat wife and external demeanour were so far away from the world that she came from and talked so little about. Others from their generation suffered even more during a period that none of us born since can ever really appreciate. I know of many more horrific stories of the Japanese occupation. They are not from my family and so are not mine to tell but they are a reminder of how cruel humankind can be and that we must always be vigilant to make sure we do our best to prevent such horrors happening again.

I know VE Day is about Europe, but the only family war stories I know are about Asia. I wanted to write them down before it’s too late, for our children’s benefit and to pay my own respects.

(Below is a picture of some of the men interned at the camp. Uncle Denis is seated bottom left. Thank you to my cousin Val, Denis’ daughter, for providing it. The original hangs in the Kanchanaburi Museum in Thailand.) 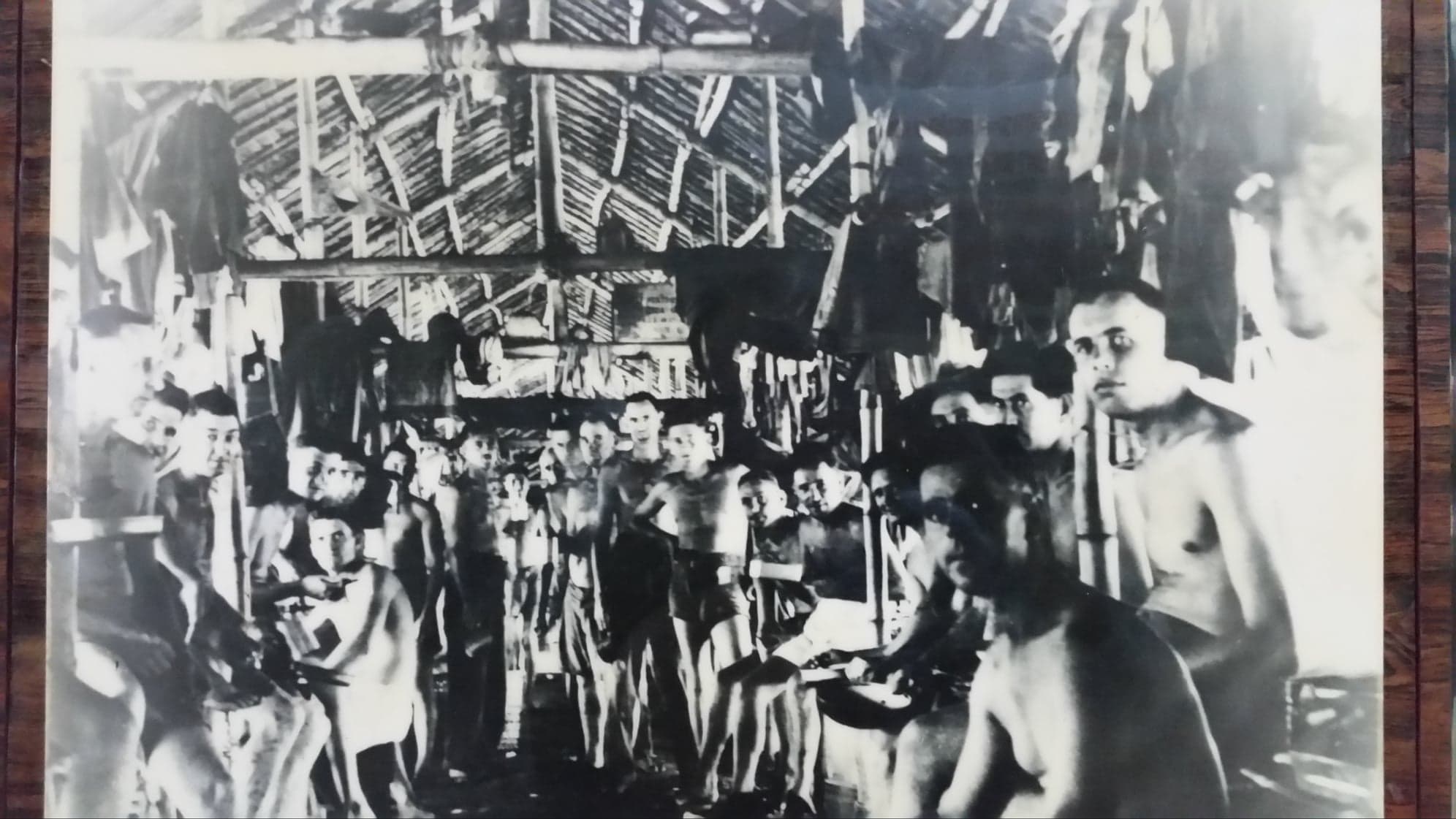 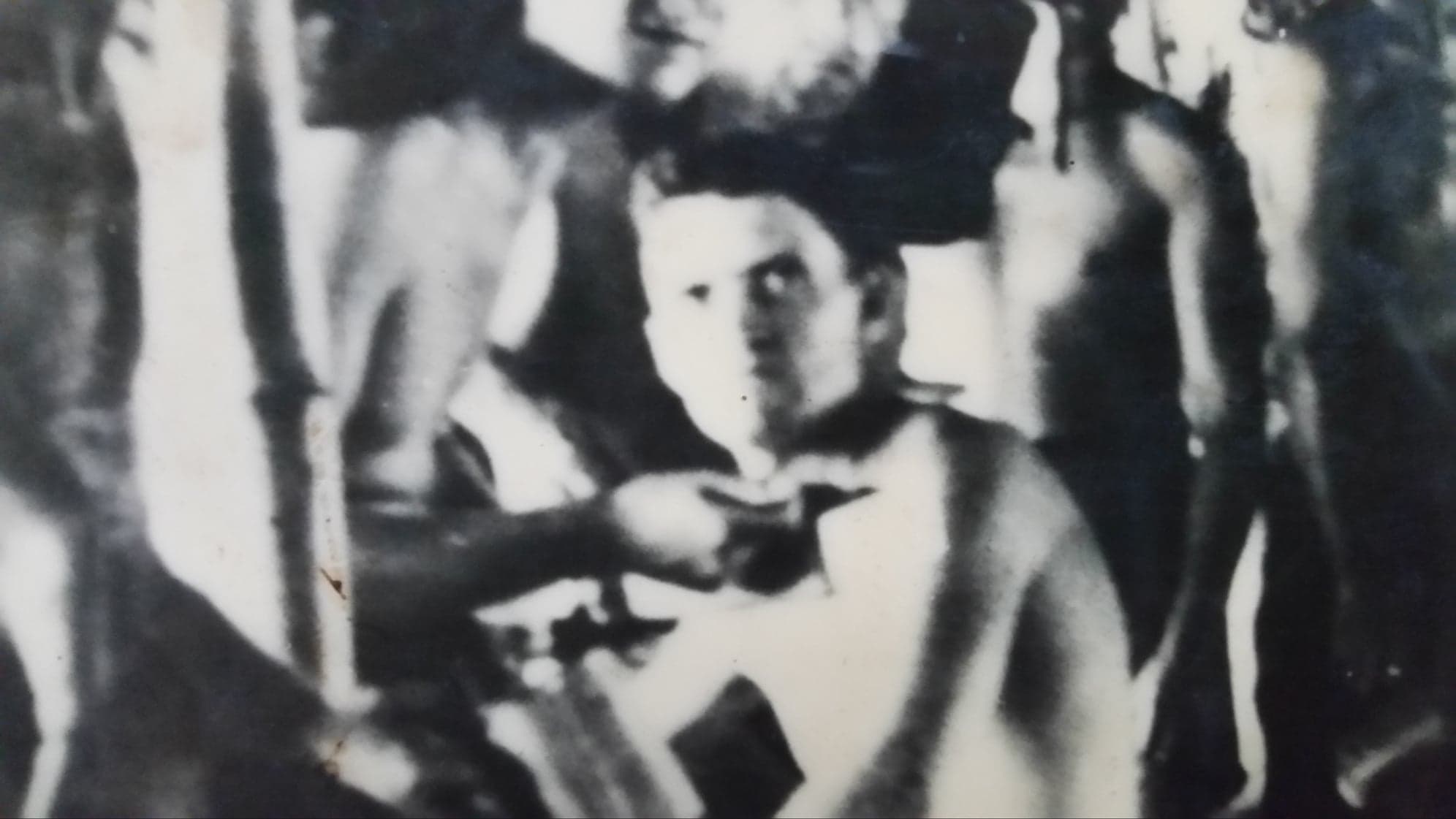